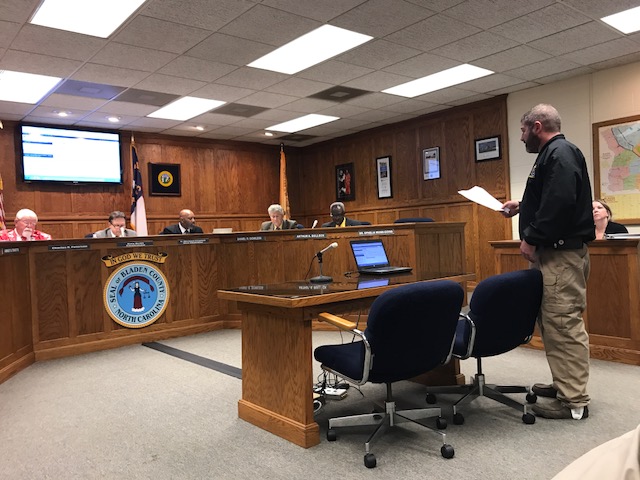 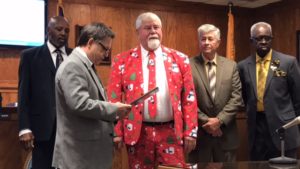 The Board of Bladen County Commissioners had a long agenda Monday evening. Tax matters, finances, Sheriff’s needs, and a lawsuit were only some of the items for the group to cover.

Charles Ray Peterson was recognized for his work as Chairman of the Board of Commissioners during the past year. Peterson accepted the plaque with a jolly smile in his Christmas suit. 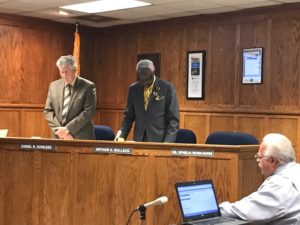 After the moment of silence, prayer, and recognition was over the commissioners got down to business. The commissioners discussed their feelings about the Opioid Epidemic. They listed who they felt had blame in the game besides the pharmaceutical companies. On a few of the commissioner’s naughty list were doctors, pharmacists, the government and the users.

Attorney Cynthia Singletary was back in the audience to answer questions about her proposed resolution and contract she distributed to the commissioners at the last meeting. Singletary reminded the outspoken officials while the problem is bigger than the pharmaceutical companies, the companies have been found doing things they should not have been doing to push their products. She also said there were at least 46 other counties already joining forces in the lawsuit against the companies. View the presentation given by Singletary from the last meeting, here.

The commissioners did approve the Sheriff’s Office to purchase 53 Ballistic Helmets for a purchase price of over 14,000 dollars. They also approved special appropriation funds the Sheriff’s Office received for the training center. Sheriff McVicker promised those in attendance he would use the money wisely.

Wayne Raynor, the Interm Health and Human Director asked the commissioners to renew agreements with expiring dates. Raynor also asked for approval of an agreement with the office of Rural Health. The agreement is for $16,700 in funding to pay for medical access for pregnancy and dental care. The commissioners approved all Raynor’s requested items. 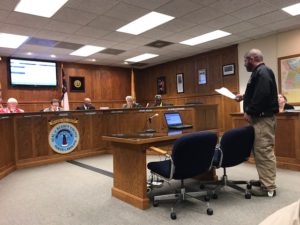 Bradley Kinlaw, Director of Emergency Services reported on his purchase of a generator with grant funding and asked the commissioners to approve a request for a grant application and approving a memorandum agreement with County of Gates. The commissioners approved the items requested for Kinlaw.

A few advisory boards will see new faces in the upcoming new year. Commissioner David Gooden was appointed to take Commissioner Ray Britt’s place on the Economic Development Board, Dwayne Raynor and Marianne Valentiner were nominated to join the Division on Aging Committee, Meagan Thompson was appointed to join the White Lake Planning and Zoning Board. Most of the advisory boards had reappointments. The Library Board is still in need of one citizen to serve on it. If you would like to serve on an advisory board contact the County office or see your local county commissioner.

Last but not least after Greg Martin gave the calendar update, Chairman of the Board of Commissioners reported back regarding the Chemours and the GenX meeting conducted on the last Thursday evening at the Gray’s Creek High School. Britt said Vice Chairman of the Board of Commissioner G. Michael Cogdell, Greg Martin and Britt, himself went to the meeting.

Britt said, “There is still a lot of confusion and questions.” Britt reported there were rumors about the Bladen County Commissioners not having a meeting with Chemours. “There was a meeting right here,” Britt said.

Commissioner Arthur Bullock said he heard people saying the meeting was held at Gray’s Creek because they could not find a place in Bladen County. Britt said, “They should have come to the commissioners because we would have found them a place to meet.” Bullock agreed with him.

View Related articles and a video from last night’s meeting below: